Infections of the Ear

Ear infections are common and represent a significant proportion of a family doctor's work. Fortunately, the majority of infections settle without ill effects whether the problem is in the outer, middle or inner ear, although sometimes longer term problems can arise.

The ear is divided into three parts: outer, middle and inner (see diagram). Infection in each part will give rise to certain patterns of symptoms and the type of symptoms which may occur with ear infections include:

The only sign of an ear infection in young children may simply be a fever and some tugging of the ear by the child.

Dependent on which features are predominant, it is possible to identify the infection as arising within one of the three parts of the ear. 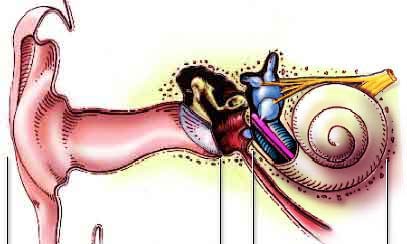 Drawings by S Blatrix, adapted with permission from ' Promenade around the cochlea'. This is an excellent site for explaining in detail how the ear works.

The skin can become so swollen that the ear canal closes, causing temporary deafness, and there can be a scanty discharge from the ear. It occurs commonly in people who suffer from skin problems such as eczema, psoriasis or dermatitis but also in people with narrow ear canals or who swim a great deal.

It can affect both ears and often keeps recurring, especially if you are otherwise rundown or stressed. Not surprisingly, such symptoms usually mean that you will need to consult your doctor in order to receive effective treatment.

Treatment for outer ear infections is generally in the form of antibiotic ear drops which are instilled into the ear canal for at least a week. Sometimes antibiotics by mouth will also be necessary. In severe cases referral to an ear nose and throat specialist is both necessary and appropriate for cleaning of the ear canal and more intensive treatment.

Eczema of the ear canal and pinna 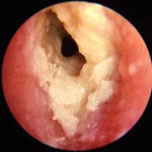 Middle ear infections are also extremely common, particularly in children. The most common is acute otitis media which is characterised by a severe earache and high temperature, generally in a child, with associated deafness.

Like an abscess, once the eardrum bursts and the pus comes out of the ear the pain eases. Happily, the eardrum almost always heals once the infection settles and the hearing also returns to normal.

Longer term problems can occur when such infections are frequent, because there can be damage to the eardrum, or perhaps persistent deafness due to fluid remaining behind the eardrum (glue ear). In such cases referral to a specialist is appropriate.

A second but more serious form of middle ear infection is when it becomes chronic or long-lasting. Generally, chronic middle ear disease is associated with a smelly ear discharge and deafness, but rarely with pain.

Other significant symptoms such as tinnitus, weakness of the face or dizziness can occasionally occur. In these cases referral to an ear nose and throat surgeon is very important as the treatment usually involves surgery to remove the infection from the middle ear and mastoid bone. To ignore such disease can be potentially dangerous.

Mastoiditis is an acute infection of the mastoid bone which surrounds the ear. It is much less common than in previous decades, but certainly still occurs, especially in toddlers, and it needs urgent treatment with antibiotics once the child is admitted to hospital. 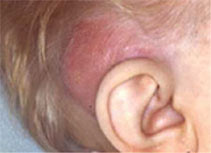 Mastoid abscess behind the ear

Infections of the inner ear are fortunately less common and are generally caused by viruses, although occasionally by secondary bacterial infection. They tend to cause problems with sudden hearing loss or dizziness.

The common cold virus is perhaps the most common cause of inner ear infections but many other viruses have also been associated with sudden deafness such as mumps, measles and herpes.

Infections of the ears that do not settle within a couple of days should precipitate a visit to your GP and if necessary a referral for specialist help.

Most ear infections will initially be treated with either antibiotic ear drops or antibiotics taken by mouth. When the infection is severe, admission to hospital may be necessary for antibiotics via a drip. In some complicated cases surgery may be the best form of treatment.