Glue ear is a condition in which fluid accumulates in the middle ear behind the ear drum. It is the commonest cause of partial deafness in children and it is estimated that one in four children are affected with glue ear at some stage of their lives. 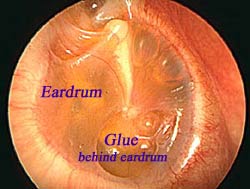 The Eustachian tube normally plays an important role in maintaining equal air pressure between the outside and inside of the middle ear. When the tube becomes obstructed, the air in the middle ear becomes absorbed and the resulting vacuum draws fluid into the middle ear cavity from the lining of the ear (the mucosa).

Initially the fluid is thin and watery but eventually it becomes thick and tenaceous, hence the name ‘glue ear'. Because the middle ear is now filled with fluid rather than air, the hearing is muffled. Obstruction of the tube may be due to repeated bacterial and viral upper respiratory tract infections, enlarged adenoids or nasal allergy.

It is important to note that in children the Eustachian tube is more horizontal and smaller than in adults and this is one of the reasons why glue ear is relatively common in children.

Because of the change in size of the Eustachian tube as you get older, and becaue you tend to be less prone to infections as you get older, children usually grow out of glue ear. However, it can take a long time, although it usually resolves by the age of 12. Glue ear may lead to delayed speech development, behavioural or educational problems.

There is some debate about how effective medical treatments are and the mainstay of treating children with glue ear is with ventilation tubes (grommets).

The decision to operate and insert a grommet in the eardrum is dependent on many factors such as the patient's age, whether there are recurrent middle ear infections, pain, speech delay, learning or behavioral difficulties.

It can also depend on the appearance of the eardrum (for instance whether there is a retraction pocket, which is a localised area of scarring that may lead to problems).

Young children with poor language development, pain or recurrent ear infections should have grommets inserted as soon as possible. Older children with few symptoms can be treated conservatively with regular follow-up visits in the outpatient clinic, to monitor their hearing and the appearance of the ear drum.

The main objective of grommet insertion is to get rid of the fluid in the middle ear by allowing air to enter through the grommet, so temporarily bypassing the problem. Normal hearing is restored once this objective is accomplished.

Grommets are available in may different shapes and sizes. On average, a grommet will stay in place between six to 12 months and will then fall out as the healing eardrum pushes it out into the ear canal.

If the child redevelops glue ear, it may be necessary to re-insert another grommet. The operation to insert a grommet is usually performed as day-case surgery under general anaesthesia and it is the most common ear nose and throat procedure. 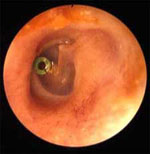 The main complication associated with grommets is infection, but this can be treated with oral antibiotics or ear drops. In order to prevent infection, children with grommets are usually advised to use ear plugs and a bathing cap when going swimming and also to avoid diving, although opinions among surgeons do vary. This is particularly important in children with sinusitis or rhinitis.

However, infection can also arise from the nose via the Eustachian tube, even when the ears are well protected.