Hearing loss is common and can affect people of any age. About 16% of adults in the UK have some degree of hearing loss. It is thought that half the general population above the age of 75 have some hearing loss. Children are the next most common group to be affected, usually due to fluid or infection in the middle ear but also due to congenital problems or viral illness during early childhood. Hearing loss can interfere with normal communication with others on a daily basis.

How your ear works

We are able to hear because sounds enter the ear canal and pass along it to the eardrum. The sounds cause vibrations first of the eardrum and then of the little bones, called ossicles, which bridge the gap between the drum and the cochlea (part of the inner ear).

Outer Middle Inner
Drawings by S Blatrix, adapted with permission from 'Promenade around the cochlea'.
This is an excellent site for explaining in detail how the ear works.

The following image shows how in the cochlea, the vibrations are translated into electrical signals which are passed on to the brain along the acoustic, or auditory, nerve: 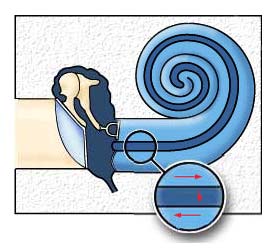 The causes of deafness can be broadly grouped according to where in the ear they occur. A problem of transmission (or conduction) of soundwaves through the ear canal and middle ear is referred to as a conductive hearing loss. A problem with the translation of the soundwaves into an electrical signal by the inner ear or the onward passage of those electrical impulses via the nerves to the brain is referred to as a sensorineural hearing loss.

A conductive hearing loss occurs when there is a failure of the conversion of soundwaves into movements by the eardrum and the little bones of the middle ear. This can occur either because the soundwaves are not reaching the eardrum, for example because of wax blocking the ear canal, or because the vibrating mechanisms of the eardrum or ossicles are not working properly, for example because of current or previous infections.

There are a great number of causes of conductive hearing loss including blockage by wax, infection, a collection of fluid, trauma or fixation of the ossicles in the middle ear (which is called otosclerosis). Fortunately, they can often be treated and hearing in the infected ear can be corrected or improved.

The main difficulty with sensorineural hearing loss is an inability to hear adequately in conversations, especially when there is background noise. Many people complain that they can hear the sounds of a conversation, but cannot discriminate exactly what is being said. It can lead to immense frustration and feelings of isolation.

Although frequent in older people, it is not uncommon for people to notice problems with speech discrimination whilst they are in their 30s or even earlier, especially if they have had regular exposure to loud noise, for example by going clubbing.

Whilst there is no absolute cure for a sensorineural hearing loss, hearing aids help to amplify or increase the sounds that are transmitted to the inner ear and so partially overcome the hearing loss. The technology in hearing aids is continuing to improve and they can work very well for many people.

When to seek advice

You should always see your doctor urgently if you have a sudden hearing loss, as sometimes treatment for sudden deafness should be started within 48 hours of its onset.

If you notice a hearing loss only in one ear, you should see your doctor, who will probably refer you on to an ENT specialist or an audiological physician.

If you (or people around you) notice a gradual deterioration of your hearing you should seek advice from your doctor who will advise you of the appropriate action to be taken, and will be able to organise a hearing test and specialist referral if necessary. 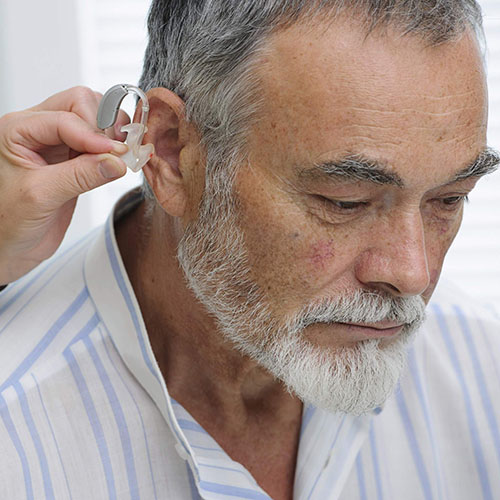